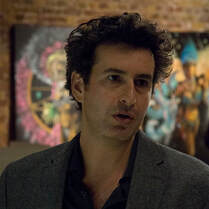 Drawing on experiences shaped between his life in the UK and a strong connection to Brazil, Caio Locke interweaves interior and exterior worlds in the setting of his surreal or parareal cities. An ostensible interest in architecture, in part inherited, provides a structure in which to explore personal preoccupations with philosophy, culture, history and future. For the last decade he has been working within the mediums of painting, design, and sculpture.

Through a unique and meticulous handling of colour and patterns, Locke employs perspective anomalies, optical depth and Escherlike paradoxes to achieve his intricate compositions. His distinctive style owes its beginnings to etching, a discipline he learned in his formative years. The results bespeak a mathematical diligence and abstract contemplation of the past, present, and future. Reality is sieved through an atemporal dream-filter that interconnects recognisable motifs and encourages a response to these utopian projections akin to a hypnagogic state of consciousness, the sensation of transitioning between wakefulness and sleep. From this method of exploration, he addresses themes of self-transcendence and synthesis with one’s surroundings. The artist’s paintings often place the viewer upon a threshold in-between time, reality, and dream, welcoming one to consider the potential of our relationships with the environment, man-made and natural, and with each other.

His work is collected and exhibited in the UK and internationally, and have been displayed at a number of prestigious locations, such as the Royal Museum of Scotland and Royal Hospital Chelsea. His previous principal solo shows have been held at Oaktree & Tiger Gallery, Hoxton Gallery, Cobden Club, Rook & Raven Gallery and the Embassy of Brazil, London. He has been commissioned on major public art projects such as the Fabergé Egg Parade, London Elephant Parade and the BFG Dream Jar Trail.
The Artworks (Ashurst Art Collection 2019) 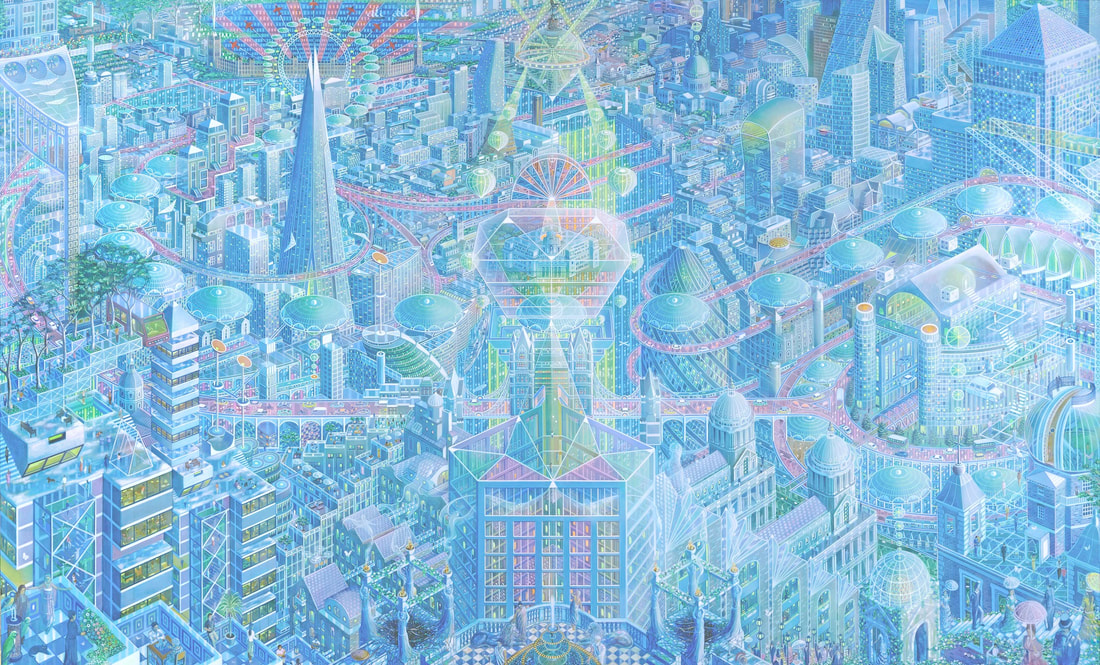 Metropolis London
Acrylic on Canvas
152 x 252cm
Caio Locke’s complex skylines can be deciphered using the framework of heterotopia – meaning “other place” – a term first theorised by French philosopher Michel Foucault in 1967. He presented his ideas in a lecture titled Of Other Spaces to a group of architects with the intent to discuss the interaction of incompatible spaces which function in non-hegemonic conditions. For Foucault, heterotopias create an imaginary order which emphasise the inability for these spaces to exist elsewhere, or rather, highlight their utopian quality. Caio Locke’s floating dreamscapes are heterotopic; juxtaposing and inverting several spaces within the realms of the ‘real’ and the imaginary. He explains, “I am creating a place I would like to live in, I take elements of reality and use them as springboards for the imagination”. Considering this, his paintings mediate an internal vision used to articulate the outer world, a parallel space which in turn, creates an approximation of a utopia. The notion of space in parallel generates a natural scope to contemplate Locke’s artworks within the realm of pararealism. Just as Surrealism – founded upon Freudian psychoanalysis and made famous for the irrational juxtaposition of objects – fosters ideas of a higher level of consciousness, Pararealism could suggest a ‘step’ to the side of consciousness, comparing the parallel “other” spaces of the mind; imagination and reality.

​Central to the interconnected makeup of a heterotopia is time, or in this case, ‘no-time’. Locke’s environments exhibit a cross-section of the past, present, and future as though they have been sifted through a unique atemporal dream-filter. This shrouds the city, a collective habitat, in an oxymoronic veil; an infinite moment or an eternal present. Locke’s heterotopias encourage the viewer to contemplate the future in regards to their own past experiences and present knowledge. Recognising time as a human construct, the artworks invite us to question our somewhat antagonistic relationship with our environment – nature, wildlife, and manmade – highlighting how Man interrupts nature’s ‘timeless dream’. Locke’s mindscapes suggest a future where Man consciously evolves into the guardian of nature and wildlife. Undeniably, this relationship synthesises the Hegelian dialectics of organic and inorganic; animating the city as a space where these tensions aim to be resolved. This interconnectedness is echoed in geometric shapes, natural patterns, Golden Ratios, and symmetrical structures; suggesting the unified relationship of everything.
​The artworks incite Man’s innate desire for intellectual and creative exploration. Indeed, leitmotifs of ancient Greco-Roman myths and Carnival offer a mouthpiece to explore London and Rio’s cultural legacies. This forms a dialogue between two cities which meet at a liminal threshold between ‘reality’ and dream – the hypnagogic point. Greco-Roman relics allow one to look back into a ‘dream’, guided by the ancients to look to nature – drawing parallel to the organic flow of the physical meridians within us – to inform our consciousness and by extension, the city. Perhaps the skylines present a threshold where our minds are liberated from the grounded meridians, to let the mind soar or fly. Entering Locke’s heterotopias, it is evident that the rational and subliminal interface, placing the viewer upon this threshold; experiencing something analogous to the phenomenon of déjà vu. Escher-like perspective anomalies and Pollock-like ‘flatness’, like in Mind Temple, allow Locke to explore optical depth within a three-dimensional realm. This amplifies the feeling of transition and flow within his surreal, futuristic cities with hovering highways, cascading geometric towers and transparent roads with no origin or end. Indeed, famous architectural structures like The Shard or Christ the Redeemer posits the viewer with fleeting moments of familiarity before being quickly swept away into the unknown via an ‘infinity swirl’ of futuristic buildings.

This collection places the audience upon a threshold in-between time, reality, and dream, inviting one to consider future relationships with our environment, others, and oneself. Locke is not telling people what they should believe, but rather, creates an “other space” for one to reflect on the world that we collectively construct.